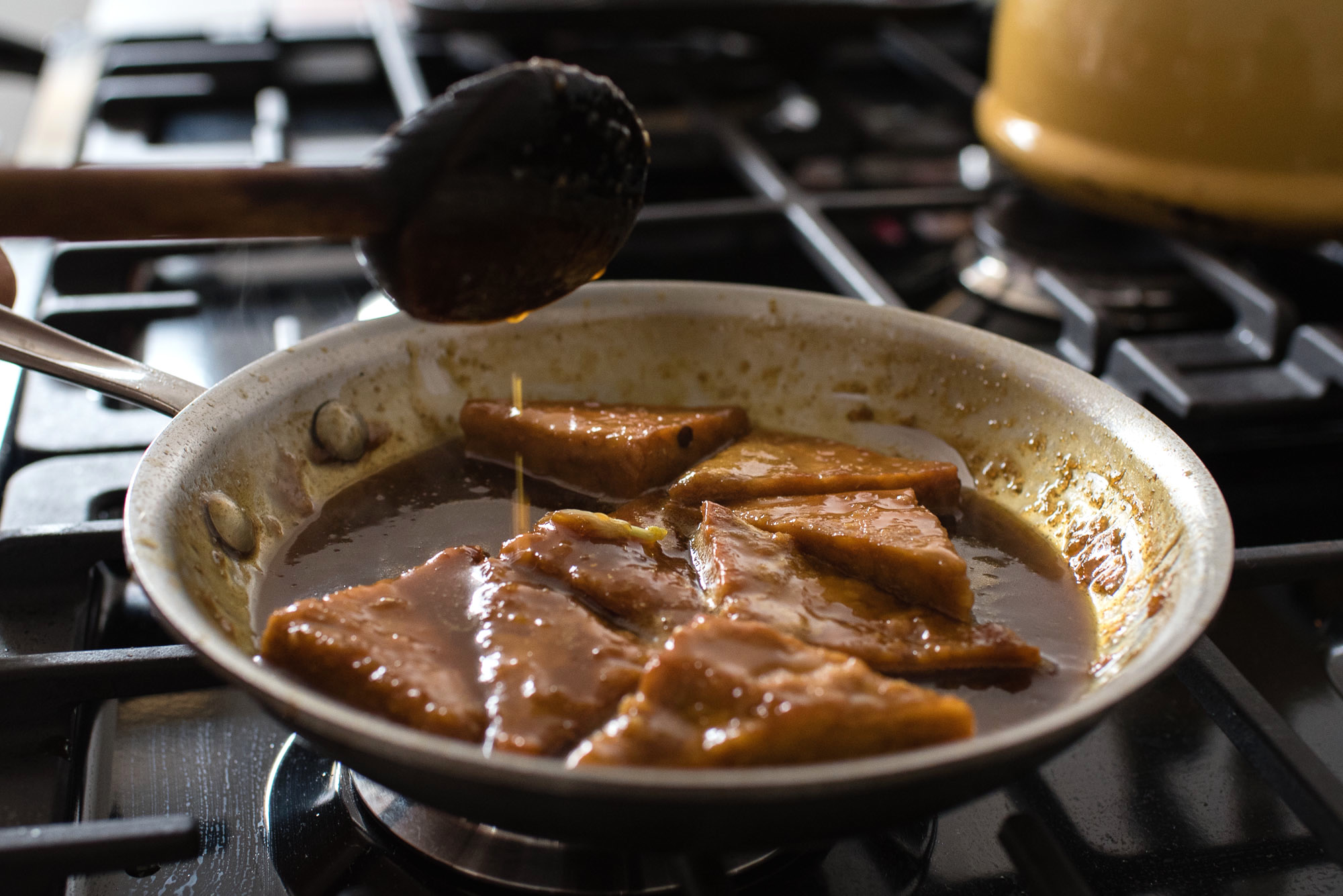 This is an old recipe, from Wholefood For Family (Coming Home to Eat), but one of my favourites. I thought it time to bring it out again – it’s super quick, vegetarian, gluten and dairy free but mostly, it’s delicious. This isn’t going to be a long blog, I’m just back at home for a week after 3 weeks on the east coast launching my new book (Wholefood From The Ground Up + classes, and I’m heading back east next week for another round. So a quick delicious meal is just what the doctor ordered, with the citrus highlights brightening up a cold winter day.  Give it a try, I know you will love it. All these beautiful photos are ©Harriet Harcourt 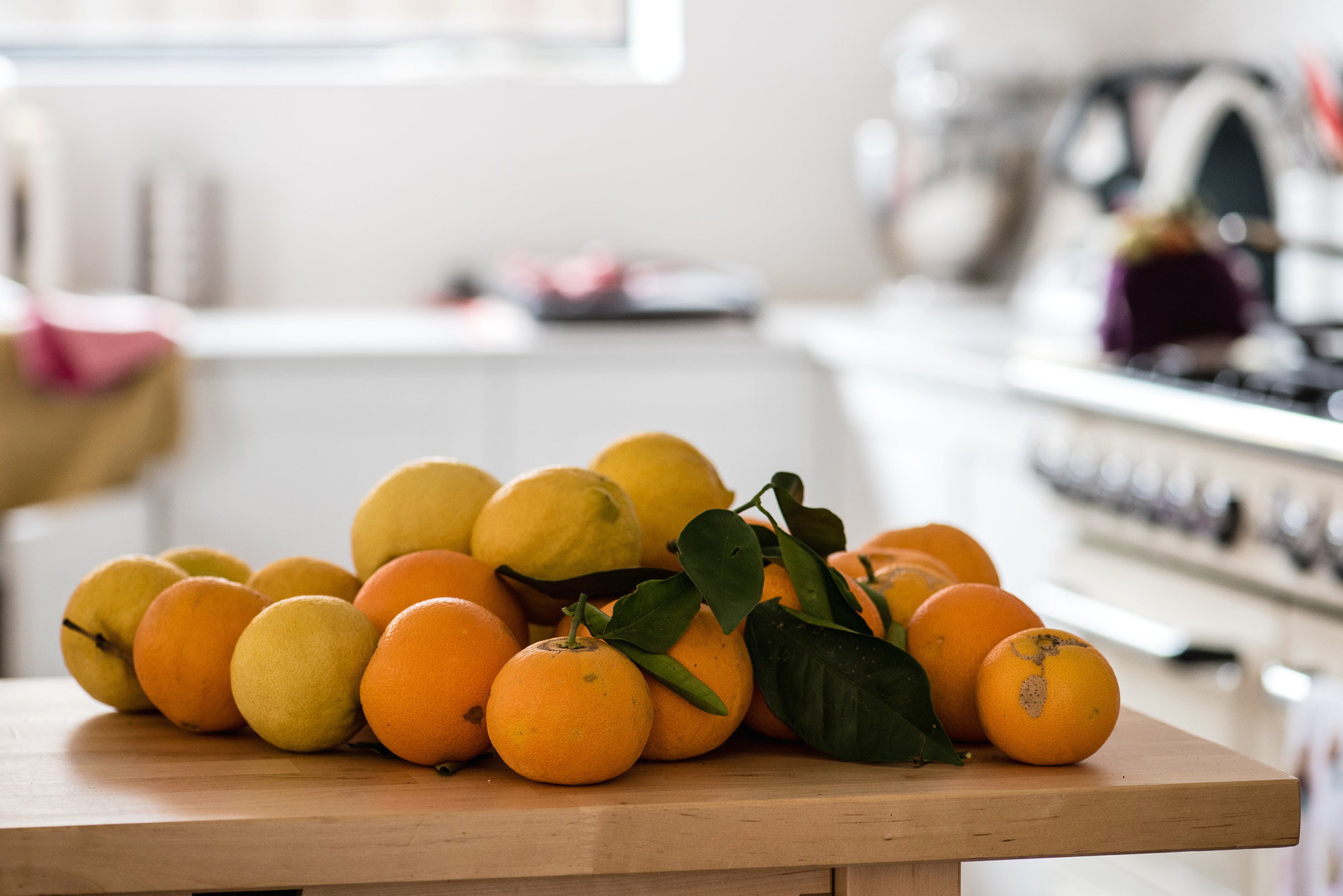 Tempeh is one of the best ways to have soy – fermentation delivers many benefits to the soy bean, making it much more digestible. It’s also delicious. And, if you are just a bit wary of soy, both my favourite brands (below) do alternative legume tempeh options.  Just a couple of things in regards to tempeh. If possible buy your tempeh uncooked… this will be softer and thicker and you may well need to cut it into half to make it thinner – this is my favourite brand but it has limited availability around Australia. In Western Australia I like this brand, when i can get it. When you look at both of these products, you can see the thick white mycellium (that white fuzz that you can see) and the obvious thickness of the tempeh itself … it may be once you fry them, you may need more sauce as this kind of tempeh will absorb it. Cooked tempeh doesn’t have such an obvious mycellium (in West Australia if I can’t get the ones above, I buy the Tally Ho.  And be choosy about your brand..some are shocking (Nutrasoy is one such example). The recipe below has been made with the biodynamic Tally Ho natural tempeh. 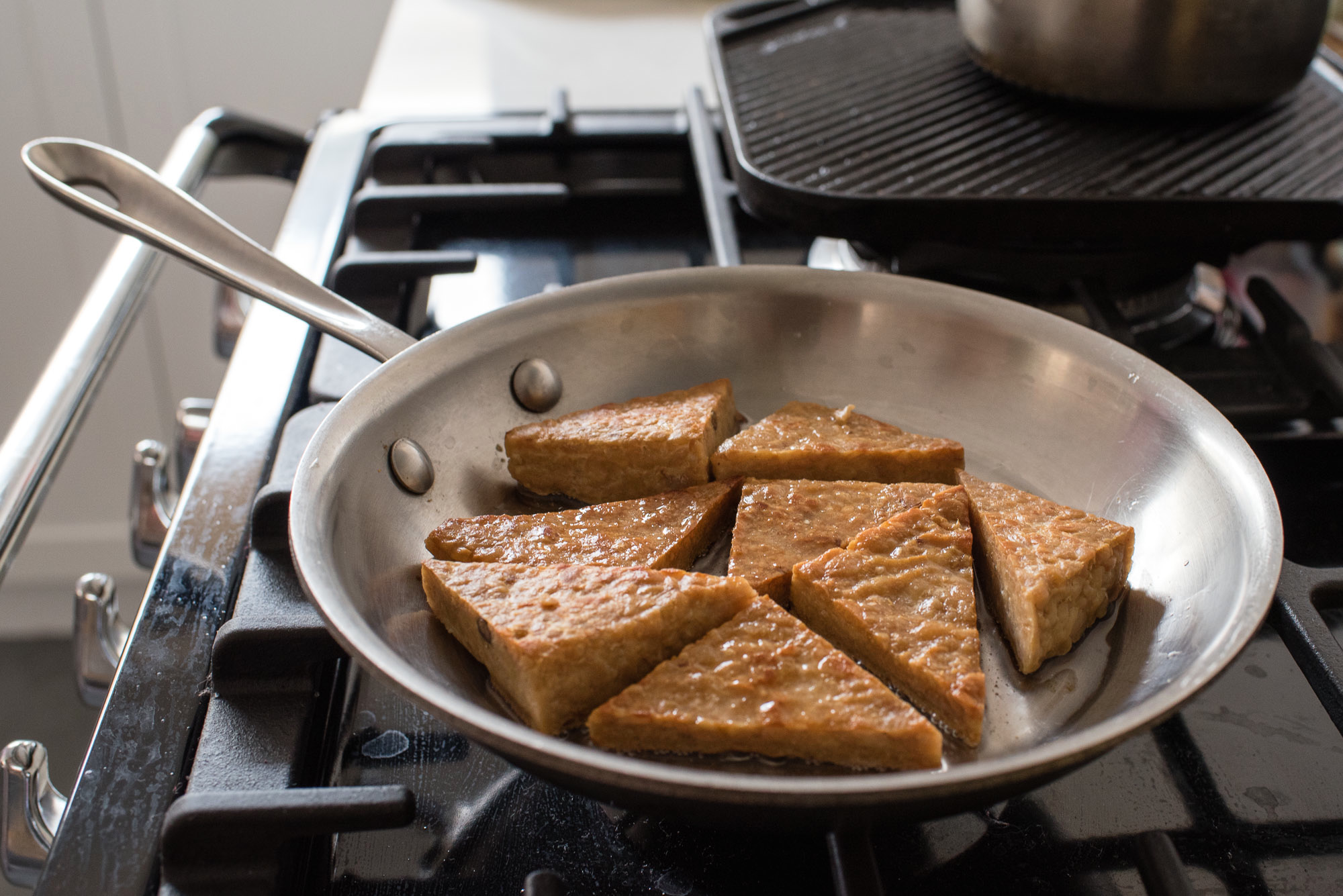 Fry your tempeh – I like coconut oil for this. 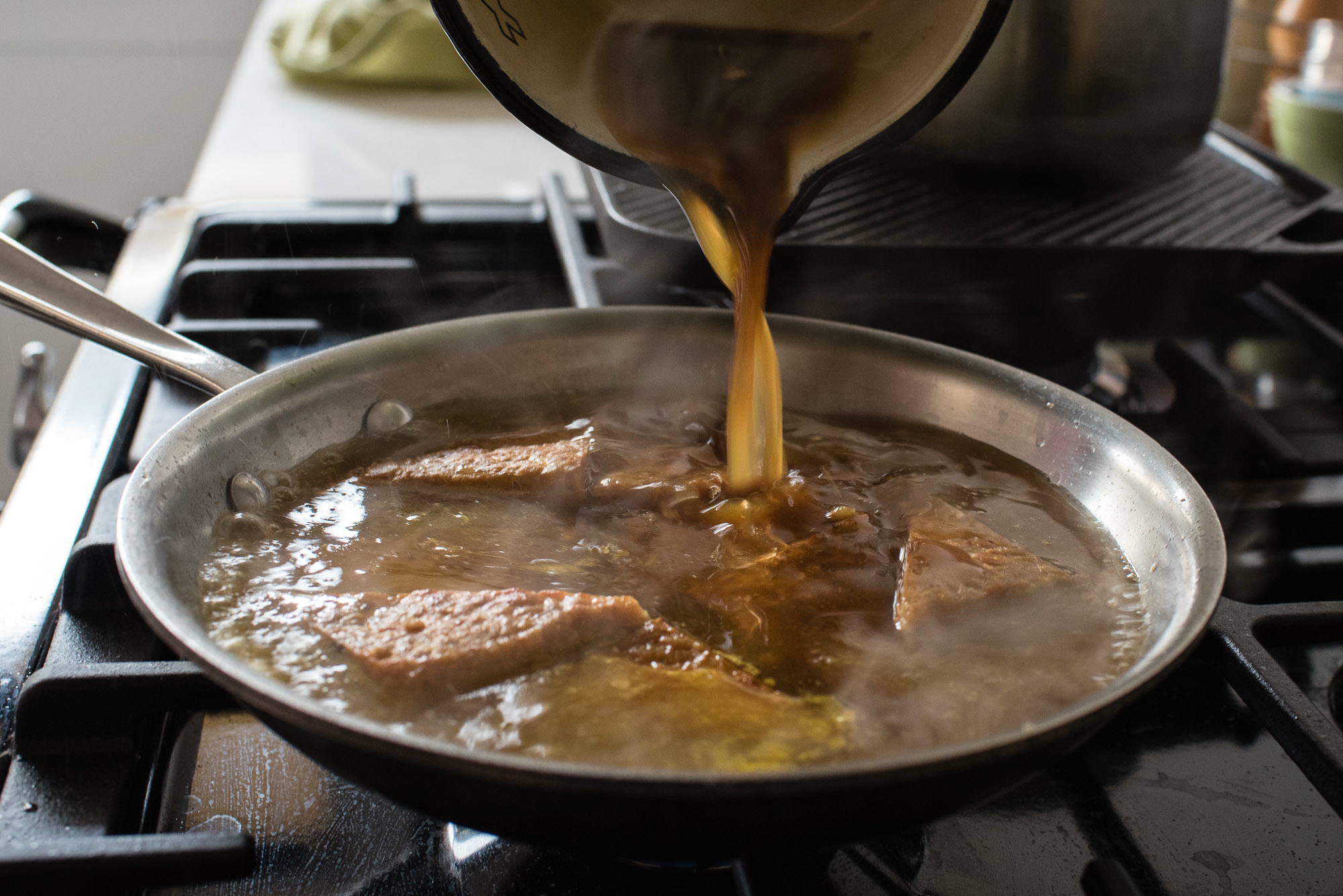 When golden, pour in the sauce 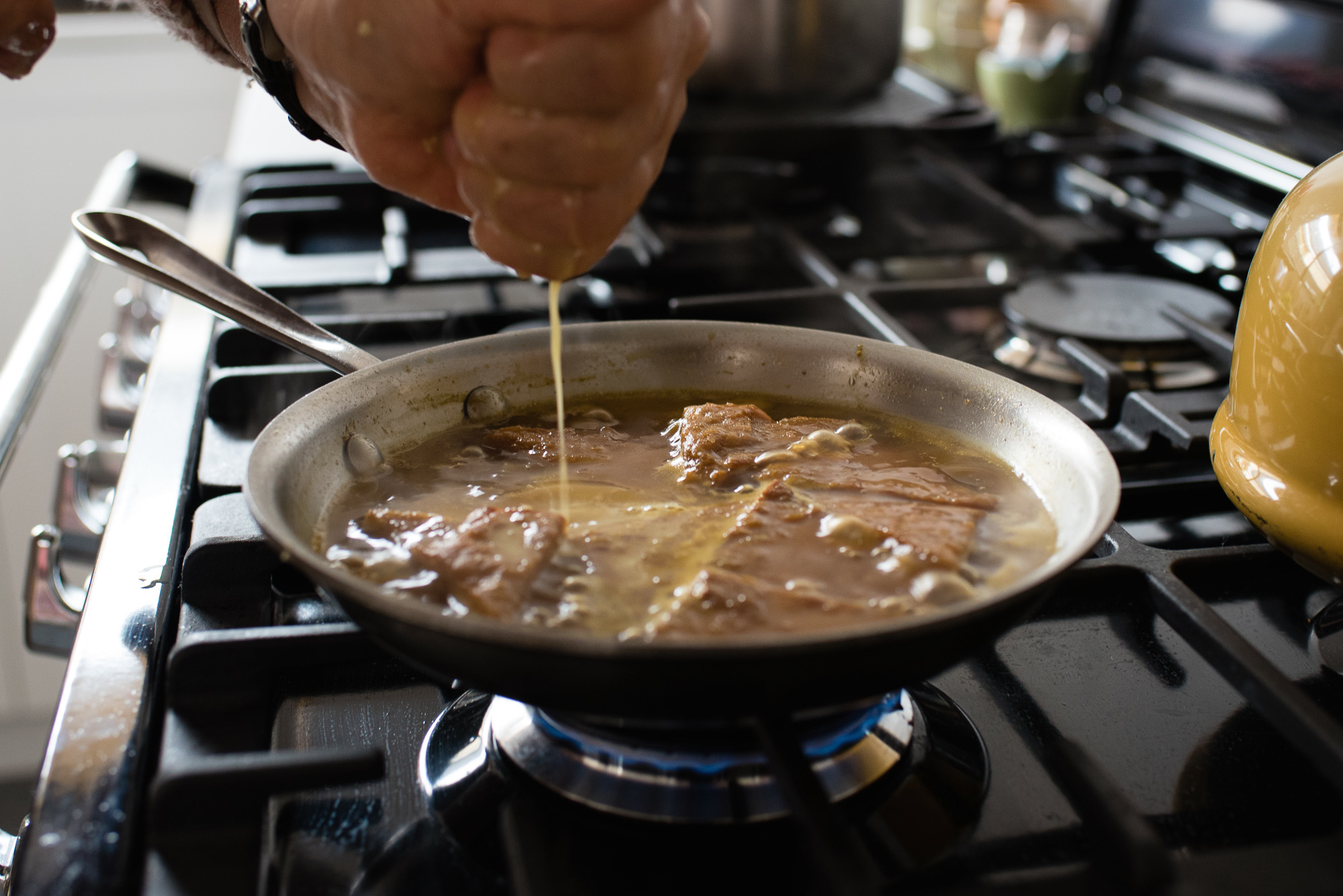 Oops, I forgot to put the ginger juice in the sauce, so I’m doing it straight into the pan 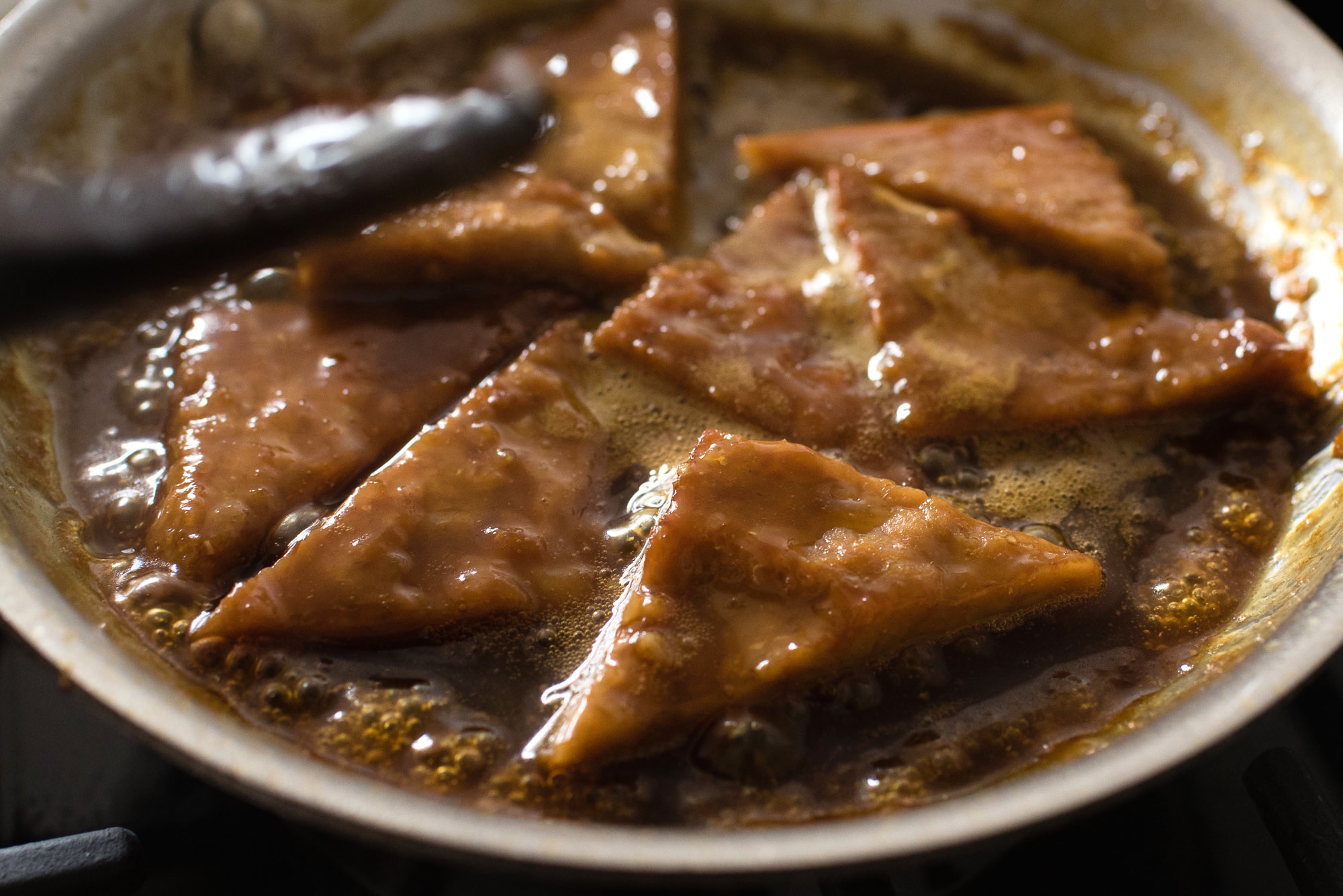 Cook until it’s a thick syrup, glazing the tempeh 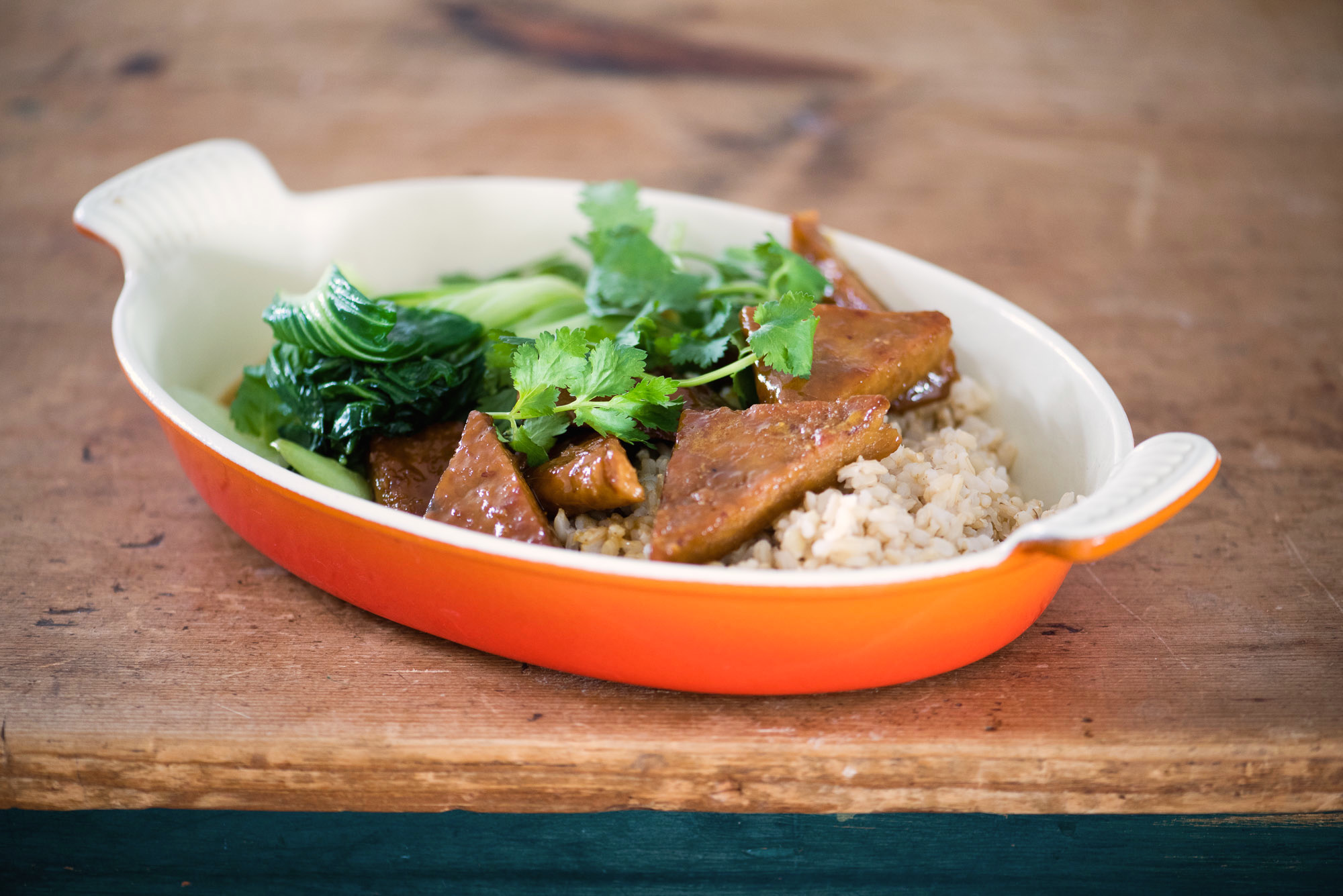 I served it with brown rice, bok choy and coriander…

OOh and a little reminder that I’m back in Brisbane for my 4 day flagship program Wholefood From The Ground Up next week (15th, 16th, 17th and 18th July)  and on the Sunshine Coast for Launch and classes Meals For Everyday and Surviving the Busy Days 22nd, 23 and 24th July… there are a few spots left in all, just email me for further details if you’re interested – jude@wholefoodcooking.com.au   ( I also have events coming up at Wray Organics, Avid Reader and Riverbend Books – I will be posting these on the events page of the website. I’d love to see you there… x Jude

You will get the best results here with a pan that holds the tempeh snugly… this will allow the sauce to cover it, and thus braise the tempeh before it reduces and becomes a glaze. I have used my ever faithful 20cm All Clad frypan here, but if I had an uncooked tempeh and thus cut it in half horizontally, I would have needed my 23 – 24cm…

Put the orange juice in a small bowl or jug. Squeeze the grated ginger over the bowl to extract the juice, then discard the pulp. Add the tamari, mirin, maple syrup, ground coriander and garlic. Mix together and set aside.

Cut the tempeh in half diagonally, then cut each half into three slices and pat dry with a paper towel. If very thick (especially in raw tempeh), cut in half horizontally as well, but you may well need more sauce.

Place the coconut oil (more if you have cut thick tempeh in half), so the base of the pan is well covered, over a medium – high heat. When the oil is hot but not smoking add the tempeh and fry until golden. Turn and cook until golden on the other side (uncooked tempeh will soak up more oil). Pour the orange juice mixture into the pan and simmer for 10 minutes, or until the sauce has reduced to a lovely thick glaze. Turn the tempeh over once or twice during this time and spoon the sauce over the tempeh from time to time.

To steam the bok choy, I simply use the same pan with a fresh addition of a little coconut oil.  Over a very high heat, add the bok choy with any water still clinging to it – it will steam and carry on, that’s fine. Toss it about, then reduce the heat and cover until just wilted. Serve as desired. 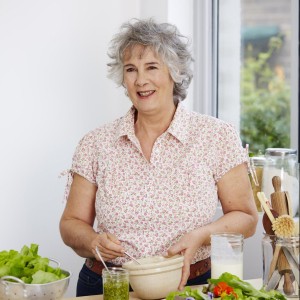 good things deserve to be shared